My chocolate lab Kona and I enjoyed a pet-friendly weekend at Stowe Mountain Lodge where they understand that pets are part of the family and know how to make them feel welcome.

Sharing a Special Bond and a Giant Hug – Erica Houskeeper Natasha Steinmann was my four-year-old daughter Phoebe’s ski instructor at Bolton Valley every Saturday in the 11-week Mini-Runner Program, a season-long group lesson for kids ages 3-5. Natasha gently guided Phoebe through the ups and downs of learning to ski—and there were good days and discouraging ones. Thanks to Natasha’s enthusiasm, Phoebe trusted her instructor’s persistence and eventually gained enormous confidence as a new skier. On the last day of lessons, Phoebe gave Natasha—her trusted teacher—a giant bear hug. At the end of the two-day Women on SnoW (WOW) camp at Stratton Mountain, I earned the Wild Woman Tamed award! I learned so much about my skiing, including the fact that I probably haven’t properly completed a turn in over five years. After just a few days of intense but fun group lessons, I was skiing more smoothly and confidently than I have since I was a kid. That’s a takeaway I’ll bring to many seasons to come. The first solid winter storm of the 2015-16 season came just a few days after the northeast celebrated the Christmas holidays with temperatures in the 60s. Goliath dumped close to 7” of snow on several Vermont resorts just in time for the New Year and when it did, our family was ready. We headed north to Killington, where the snow guns were fired up as soon as the mercury dropped and the storm added a nice layer of powder to the snowmaker’s base. We went into the trip with pretty low expectations for conditions and were thrilled to find great snow on all of Killington’s open terrain. It was a great way to kick off the season and I was left with one thought–when in doubt, ski! 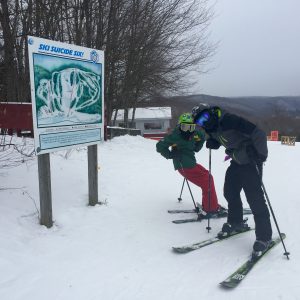 I lost count of how many runs they took – which just goes to show that a ski area doesn’t need to be big to be fun. What made it the most fun for them was the fact that they could go off on their own. I’m wondering if they’ve contemplated posting a No Grownups Allowed sign at the bottom of the chairlift. Phoebe’s Uncle John, who is an adaptive ski instructor in New Hampshire, skied with her at Stowe Mountain Resort’s magic carpet area for several hours on a sunny day in February. Phoebe enjoyed several hours of one-on-one skiing with someone who is a skilled instructor, and a person she is very close to and loves deeply. Skiing with her uncle John helped Phoebe experience a real breakthrough.

Getting WoWed at Stratton – Gina Vercesi The All Mountain Mama team had the opportunity to take part in a session of Stratton Resort’s Women on SnoW camp this season and the experience was definitely a highlight of my winter. Two full days of top notch instruction, fun runs on great snow under bluebird skies, and plenty of cocktails and camaraderie with my fellow mamas and lots of other cool women, made WoW camp truly memorable. I was blown away by how much my technique improved in such a short amount of time and cannot recommend the camp highly enough. 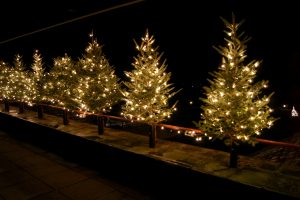 It wasn’t hard for us to get into the holiday spirit at Trapp Family Lodge. Every space in the hotel is decorated with elaborately trimmed trees and the staff plans tons of yuletide fun for visiting families. This was a season of extremes for my family, and we enjoyed all of them. Whether it was braving sub-zero weather (but having the mountain to ourselves!) at Mad River Glen or skiing in the warm spring sunshine at Bromley Mountain, we loved how hard Vermont’s ski areas worked to make skiing fun, even when there wasn’t great weather or a ton of snow.

Watching Phoebe ski on her last day in the Bolton Valley Mini-Runner Program filled me with pride. On one of her final runs of the season, I took a quick video of Phoebe and her class skiing down the mountain with Natasha. Before my eyes was a confident little girl who was ambivalent about skiing and struggled a bit with the concept. Now she was snowplowing down a mountain trail and having a blast. Bolton Valley program helped Phoebe learn how to have fun on the slopes and be safe. We are big fans of Sugarbush Resort. We love Lincoln Peak’s country village ambiance, the gorgeous terrain, the plush Clay Brook Hotel, and the outstanding farm-to-table fare. What we didn’t realize was how hard we were going to fall for Sugarbush’s “other” peak. Mount Ellen, fondly known as Sugarbush North, exudes the funky charm of a 1960s ski resort. My girls and I took our first freestyle lesson with a great young guy named Jack, who had us riding boxes and rails and launching off some low jumps in no time. Later we headed up to the summit to ski the aptly named Panorama into Rim Run, drinking in some spectacular Green Mountain views. Our day ended with pizza and some rowdy games of Corn Hole in the lodge’s second floor lounge. 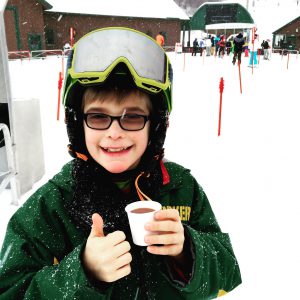 Sipping hot chocolate at the base of the FourRunner Quad at Stowe is one those small but significant memories for my family. The Swiss Mister came around with free samples and they hit the spot and made our day.

When in doubt – head out! We had a wonderful time on the slopes of Vermont despite the low snowfall and varying weather. Nothing beats getting outside with the family, dogs and all! We can’t wait to embrace whatever the 2016-17 season has in store for us. (Though we hope its snow!) In the meantime, enjoy the summer and keep in touch as we explore family friendly fun at Vermont resort during the warmer months.